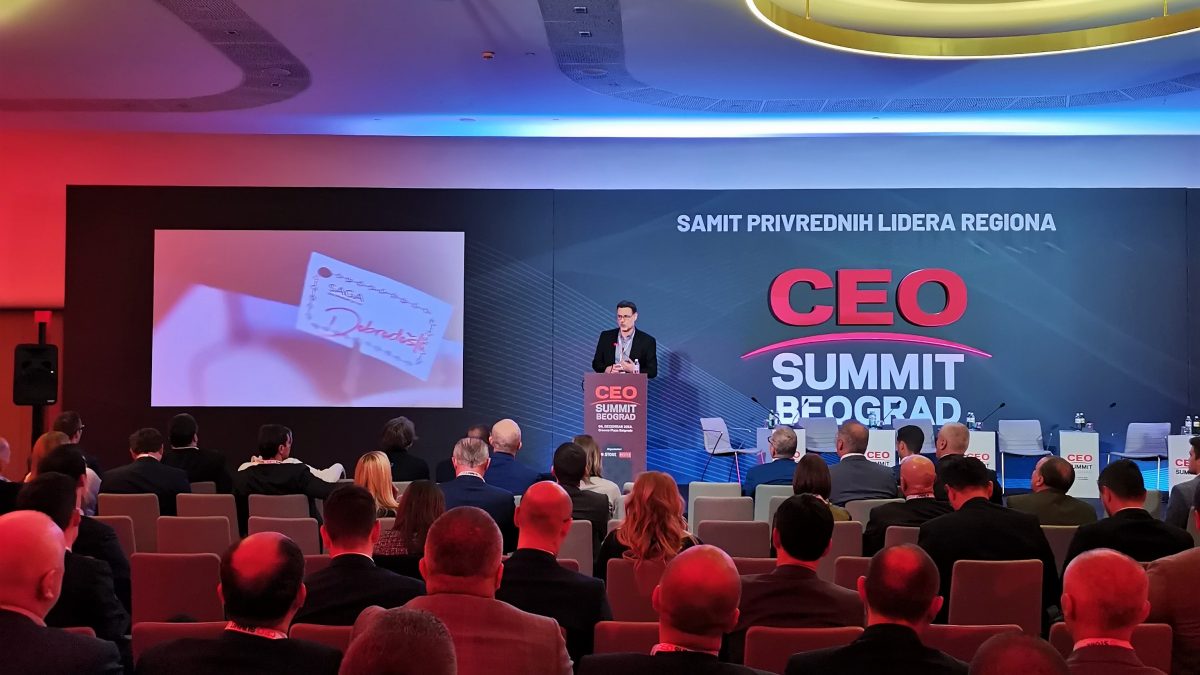 We were big sponsors of this year's CEO SUMMIT in Belgrade

This year we sponsored the Summit of Business Leaders of the Region – CEO SUMMIT BELGRADE, organized by NIN and IN STORE. The summit was held on December 4th at Crowne Plaza in Belgrade. The attendees, as one of the great sponsors, were addressed by our CEO, Nebojša Bjelotomić. In addition to Nebojsa, many other managers and leaders from the region spoke at the summit, trying to respond to how they balance the processes of creating stable and sustainable companies in the future while trying to implement strategies that bring them added value today.

Here is a speech from our CEO, Nebojša Bjelotomić:

“This year we are celebrating 30 years, and during this period we have been striving to make technology something for you that is a source of competitive advantage and not some inexplicable cost. Although I am not saying that we have not often been in a situation where we do not understand each other and that we are some expense, some people who speak a silent language. Basically, we used that position to tell you the last ten years about digital transformation. Also, my colleagues mentioned that almost everyone could accept the fact that software may have already eaten the world. And as much as in this room are mostly what is called “captains of the old industry” in jargon, the software has become very popular with you, and we somehow decided that we would no longer talk to you about digital transformation, because realistically or you are already dealing with it or you went the way of dinosaurs if you are not.

The source of competitive advantage now lies somewhere else, and you will allow me to argue today that it is data-related and artificial intelligence-related. However, before I enter the high quarters of artificial intelligence, I would devote some time to the lobby itself, which you may already be familiar with. The speaker after me will tell you about the same title, about the demographic picture, the job market situation, and he will paste the analysis and the pictures for something we managers already know well, which is that the workforce is getting smaller and smaller. Therefore, the repetitive processes are in themselves such that people make mistakes in them. You know, when an ordinary person knocks on one system for another long enough, statistics say that it is 8% wrong. Simple, boring work and you make mistakes. The machine mistakes below 1%. So RPA, or data processing through robots, is something that is already extremely accessible, a lot of you are already doing it. If you think of artificial intelligence as something you’ve seen in science fiction movies – no, artificial intelligence is the same – when you automate a process that you can automate just because it repeats itself endlessly.

About ten days ago, in Vienna, at the Peter Drucker Forum, I had the opportunity to listen to General Manager of Harman, and it is very interesting to listen to, because when it comes to new ideas about management and technology, everything is mostly coming from the east. And the man said two things that remained in my mind, and I think they apply to us. One is that the end of the 20th century was dedicated to mass production and that the beginning of the 21st century was devoted to mass customization. Then the gentleman, who runs one of the largest laundry and refrigerator companies, said they were no longer thinking about the product but about the customer experience.

And that’s the introduction to what I wanted to talk about, which is that you all have one big fortune to sit on that you may not even be aware of. It has taken time for accountants to impose that goodwill is something you keep in your financial statements. And I am almost certain that it will take very little time before the data you have in his majesty – the consumer – also becomes something of an accounting category, because it is indeed one big treasure. If the 20th century and the geopolitical game of the 20th century was about who controls oil and oil prices, then who controls data in the 21st century is someone who will have a tremendous competitive advantage, and you all have data about your customers. And now, if we take that picture worldwide, what does someone from the big market of China say and bring it down to the domestic market: just a few days ago we met some extraordinary young guys who had won a dataton. And if your HR and marketing tell you that you’re looking for programmers on hackaton, it’s already outdated. Dataton is very interesting now, and these guys, who are about 20 years old, came up and made a solution: when the first time a user appeared on your site, you never had contact with him before, that they could identify him for who he was and that based on information he has already left about himself on publicly available networks, they can give him a personalized quote, at the moment he is on your site. And what struck me most about that story with them, the guys don’t think they did anything special. You know, in their generation it’s something that is a must, you won’t be offering everyone the same. We listened to the Millennials for a long time, then got the chance to meet them, and now the story of the next generation begins. Some call them the Z generation, the Entitled generation, which is a generation that, apparently because of the general availability of information, will expect to get all the same. So your jobs that currently have a premium offer, a VIP offer, whatever you call that layer of your offer, will be forced to offer the next generation exactly the same. When you offer someone who is the most able-bodied customer and someone at the bottom of the pyramid, you have to offer the same because having that kid goes to one of the networks and write down what he thinks about how you treat him is a lot more detrimental to you, than to design your supply chain so that your premium extends to your entire customer base. And how to do it again? We go back to the data. So, what I wanted to tell you once again is that technologies such as natural language processing (NLP) already exist, where we have been able to create virtual assistants that extend your business hours to 24 hours that solve the problem of no one else he doesn’t even have a second to devote to you. You know, sometimes you say, “you’ll save an hour or two by not having to come to me, but we can correspond,” and someone says, “oh, thank you very much.” Now, if you need to look for something on a website and it lasts longer than 20 seconds – you’ve lost that user. So, virtual worlds help you solve instant gratification and solve the problem 24/7, which will become the norm when it comes to opening hours.

I would like to refer to one piece of information that these big worlds, who have the power to calculate, have calculated, and the source is IBM – in the last 5 years, 90% of the data that currently exists in the world has been generated. So we all carry phones, we all use apps, watches or the like, and we all leave data and create a huge amount of data. What is expected is not only you analyzing in the rearview mirror, in the sense that you know what someone used to do. You are expected to do predictive analysis, that is, based on the information you have, you can guess what he needs, not if he is a group of 25 to 35, but in the name, with his characteristics, which he leaves on his Facebook and Instagram and that is something that will become the norm. And it’s not the same whether you offer him in February, whether you offer him in June, whether you offer him when he is at the mall or when he is at your house. It is expected that you already know this about your user.

So, that’s something that’s coming to us. Fortunately, all that I have described to you is globally referred to as artificial intelligence, but as I have seen a good slogan, where these scholars who oppose the slogans tell me that it is still more true: “Artificial intelligence is not magic, artificial intelligence is math. ” And we do a lot of math, and what is yours and my happiness is that we have a lot of good people who are adept at algorithms and math, and it is ours to make sense of this data on the one hand, and please – be happy because you have the treasure you sit on, and let’s do something with that data, and then we will be able to do something that will be able to compete in the big white world and not make it a point that you win our championship, which we all talk about it is furnished, but to win the World Cup and then to be the champion of the world or what can be done when you are from this region. “

Ghana Minister of Communication Visit to NF Innova and Saga

Ghana Minister of Communication Visit to NF Innova and Saga